​​Pattern: Largemouth in weeds on or near breaklines between 3-9 feet deep

How it Happened: It happened fast and furious, and they have taken control of the West Division. 15 minutes into the tournament they had 3 keepers. 30 minutes into the tournament, and they were culling. An isolated patch of grass with small coontail mixed in with “stringy” grass was the juice. “It was isolated grass, not a big weedbed,” admitted Selig. “The fish hit the jig when it was pulled off a weed.” They caught 10 keepers off it in the first hour.
3rd Place:  Rodney & Craig Fannin
​
Weight: 14.75

Pattern: Largemouth bass on the outside weed edges

How it Happened: They began on point in Eagle Bay and had a limit by 8:00. Their initial bait of a choice was a creature rigged Texas style, but that only produced 2 keeepers. Once they began slinging a 7” Powerworm ribbontail, the game was on fire as they went on to catch more than 30 keepers!​​
4th Place:  Kris Shipley & Lance Tresenriter
​​​​Weight: 14.71

How it Happened: At 7:30 the team caught the second biggest bass of the tournament on a homemade worm, a 4.23 pound largemouth, which helped them, “fish a bit easier.”​​​​
Click to view Results and watch the Weigh-in.
Victories, which lands them in fifth place. Keep in mind, this is the ninth year of the circuit, the leaders have 7, and they have been fishing together for less than 3 total seasons.

At Winona, a little resolve came into play. It did not start off well. After 2 hours, their livewells were still empty; in fact, they had not had a single bite. After a move in location, Wheeler quickly caught their first bass - a 14” squeaker. But 5 minutes later, and he was hauling in a 3 pounder. They completed their limit at 9:30.

From that point, they kept their trolling motor in the water casting jigs and chatterbugs to the outside edge of the weeds, “The weeds only came out to 4 feet,” explained Wheeler. “The biggest difference we saw from others was they were focusing on the weeds, and we stayed behind them.”

In one 5 minute span, they caught their 3 biggest on a sweet spot. Earlier in the day they caught a decent fish (ended up being their fourth largest) from the same spot. Beyond that, it was a grind, “one here, one there.”

Overall, the chatterbug only produced 2 keepers that were culled out. They bagged 3 limits total.​
​​
​​Winnings: $740
At 9:00 they ran to a secondary spot and never moved again. Their focus was the outside edge of weeds. Biggest fish came on ribbontail. Most fish bit on initial fall.

​​How it Happened: As stated from the poet, Steven Januchowski: “Well it all started with a heavy dew across a vast waterway known as Winona with a slight fog rising from the water. My illustrious
partner and I ventured forth towards a point where we started throwing jerkbaits and got our first keeper in about 15 minutes. Then as all other boats started flying around the lake, we went to a small area of weeds that was only, maybe, 100 feet by 100 feet in circumference and about 1 and half foot deep and threw jigs. From there we culled quite few times to get up to the weight we had; probably caught 12 to 15 keepers in that area.”
​
Winnings: $140
6th Place: Shawn Mark (left) fished solo and still managed a 13.82 pound limit that included a 4.12 pound toad, and won $120.

For the remainder of the day they rotated through a handful of spots and loaded the boat with 20 total keepers. The key depth was 8-10 feet, but they were casting to 4-6 feet. Late in the day, they upgraded twice in a shallow channel with trickworm.
​
Winnings: $450 + 312 +Lochness Lures Product = $762
Most of the fish were caught on the homemade worm off the edge of the break. A couple of keepers came on a small grub as well. Despite rotating through a handful of spots, most fish came from one. Late in the day, a critical cull came on a bladed jig in shallower water. Overall, they caught close to 25 keepers. 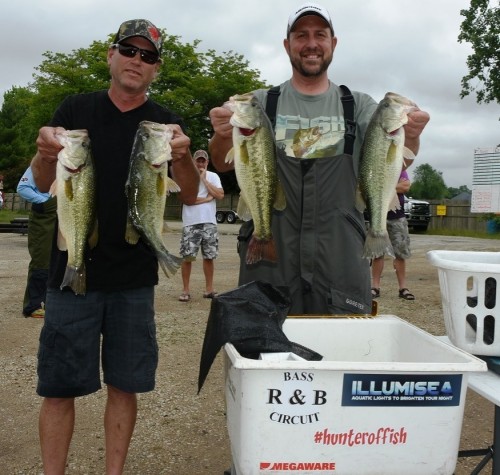 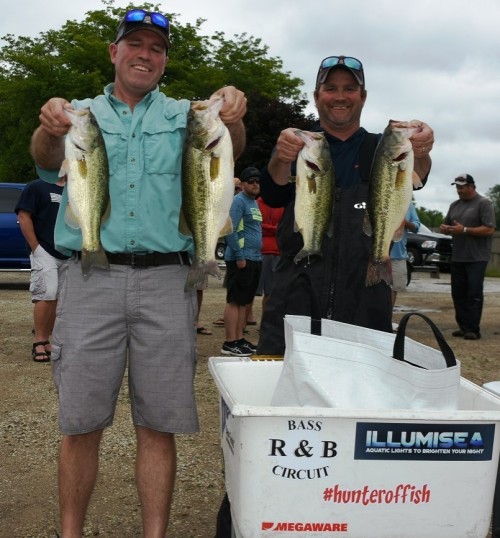 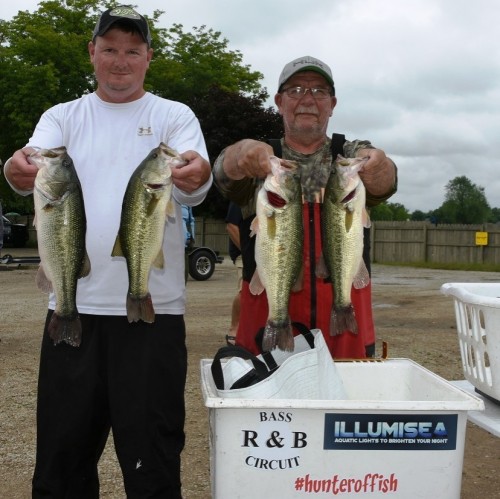 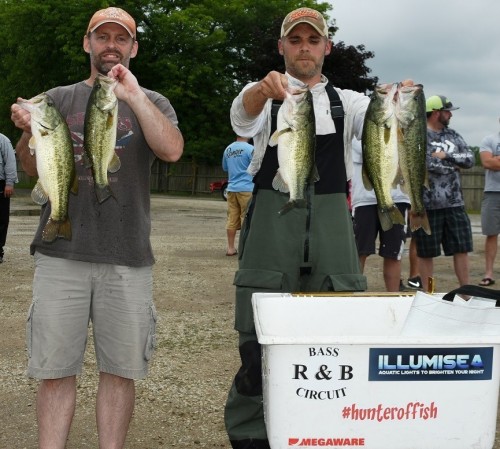 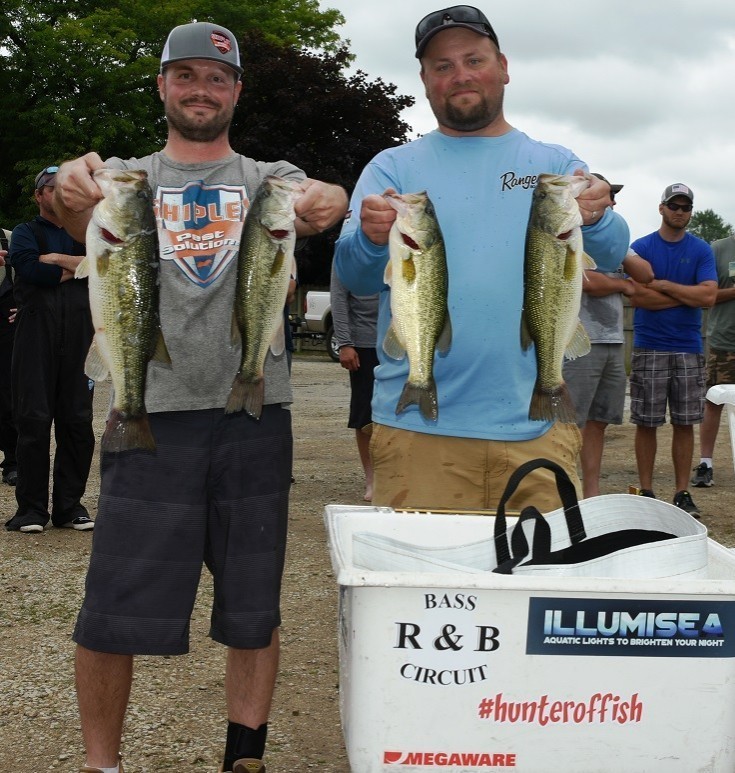 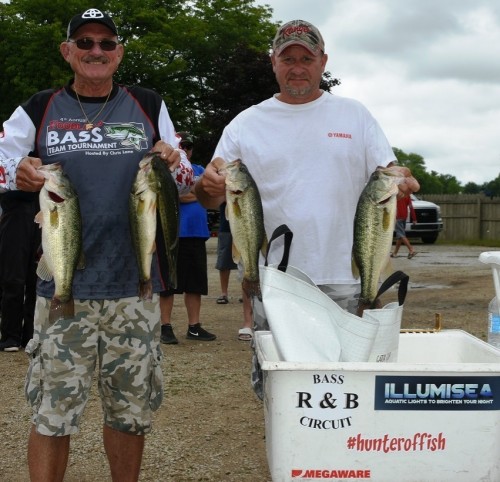 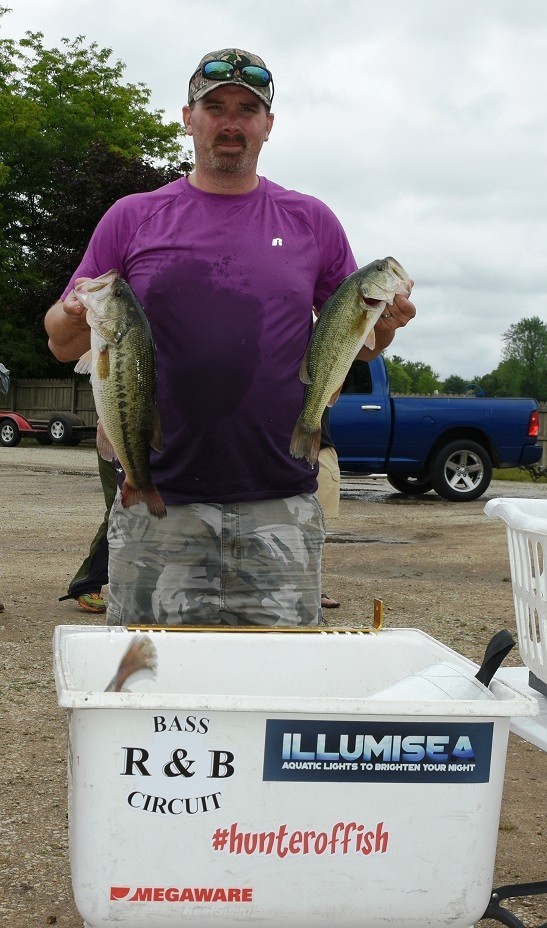 Photos were taken by photographer David Hamrick. High resolution images of these below, and on the water photos can be purchased through him. View all images on his Facebook page.