How it Happened: Morrow admits, "Plans A & B failed, but Plan C was good." Plan C was to sling their homemade jigs in the channels throughout the lake.
3rd Place:  Doug Fasick & Don Orn
​
Weight: 12.34

Baits: Swimjigs teamed up with a swimbait and tube
​
How it Happened: Only took 4 fish from Fasick and Orn to snatch their first Top 5 finish of the season, and it happened quick.
4th Place:  Brad Hoffer & Matt Hoffer
​​​​Weight: 12.23

How it Happened: Between 6:30-10:00, they threw a combination of the football and Flip & Skip jigs between 4-6 feet of water.​​
Click to view Results and watch the Weigh-in.
While the Tippy victory was a one spot, one bait deal, this day caused them to adjust several times.

​​After discovering their primary spot was occupied by a competitor, they settled on a breakline and quickly caught their first keeper 15 feet deep on a drop shot rig. They managed a few other bites there, but they came unbuttoned.

​​The bite did not last long, which is why they relocated to flipping weed clumps in shallower water with homemade jigs. Here, they boated keeper #2. But, again, the bite did not last, which caused them to reposition back to deeper water.

​​Positioned between 15-18 feet of water, they slung homemade casting jigs along the break and landed 3 more keepers. At 10:30, with a limit in the livewell, they took their flipping jigs into the lily pads and snatched 4 more keepers. Before finishing up in the Backwaters, which failed to produce a keeper, they captured 1 final keeper with a casting jig in 18 feet of water.

They began in shallow water around weeds and docks, before backing out along the breaks between 8-10 feet of water. Up shallow is where they got their biggest fish. A third keeper fell victim to the jig & swimbait combination along the edge. Their fourth keeper was caught on a tube jig.​​
​​Winnings: $250
5th Place: Matt Kiefer & Randy Baker

Pattern: Largemouth on an island point
​
Baits: 10" worm, magnum trick worm, and tube
​
​​How it Happened: Despite not being on the lake for 5 years, they found a point off an island that was holding a big concentration of fish and stayed their all day.
They threw a combination of the aforementioned baits all Texas rigged. Green pumpkin was the color of choice.

A dead fish penalty cost them a 2nd place finish, and this fish serves as a lesson to all anglers. Kiefer explains, "We caught the fish on the worm, and it was hooked on top of its mouth. It died in our livewell, and we were confused by that. However, when Randy was looking it over, he saw something sticking out of its throat. He ended up pulling three 5-inch senkos out of its throat!" It is a reminder to properly dispose soft plastic baits.
​
Winnings: $100
Lochness Lures Big Bass

A 4.42 pound largemouth ​​was caught by tournament directors John DuPont and Andy Buss on a 9K Elite Lures jig with a B & N Custom Baits jig trailer. It is their third time in 5 tournaments winning this award.

Winnings: $255 + Lochness Lures Product​​
At 9:00, and an empty livewell, they crept into their first channel and the action was fast. Morrow recalls, "Rich caught them on 3 consecutive casts, including our biggest (4.02 pound largemouth)." For the 3 hours, they rotated through 3 different channels and ended up culling 5 times.

The best channels had "junk" that was blown into them from the wind. A key to their jigs was to have a large trailer on them to slow the fall, "Every fish bit on the initial fall," revealed Morrow.
​​
After milking up the channels for all they had, at noon, they went back to the mainlake​​ ​​​and caught a few other keepers around channels, but they did not help their limit.
​
Winnings: $420
"What we found," Matt explained, "is wherever we caught 1 fish, their was always another around. Sometimes it bit quickly, sometimes it took 20 minutes."

At 10:00, while they saw most other competitors going to the docks, they backed out to 8 feet of water, but kept throwing the same baits. "Rather shallow or deeper, the edge of weeds were important," Matt said. They caught most fish by ripping their jigs through the weeds.

When in the shallow water, they threw 1/2 ounce jigs, but went up to 3/4 ounce in deeper water. The jigs were matched up with a Zoom Z Craw.​​​​ 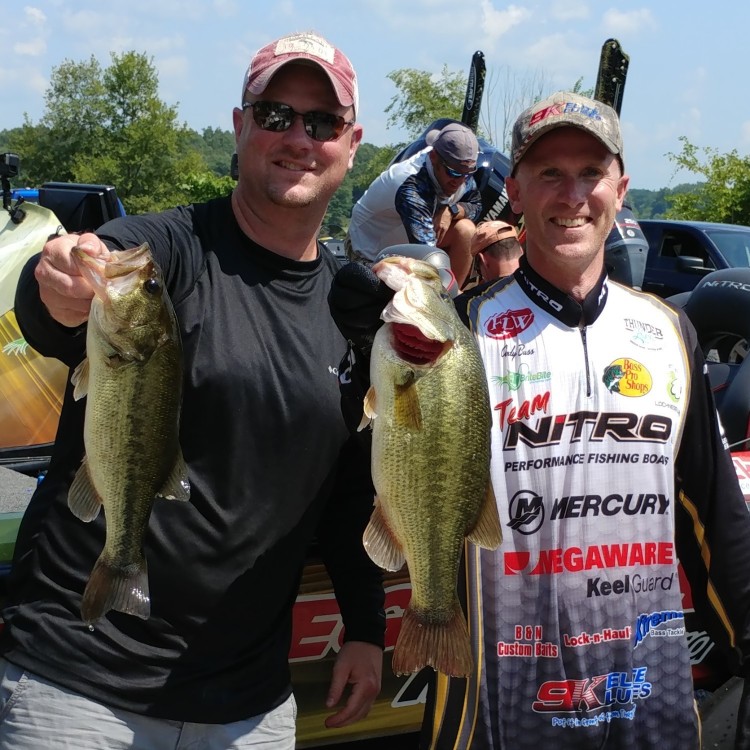 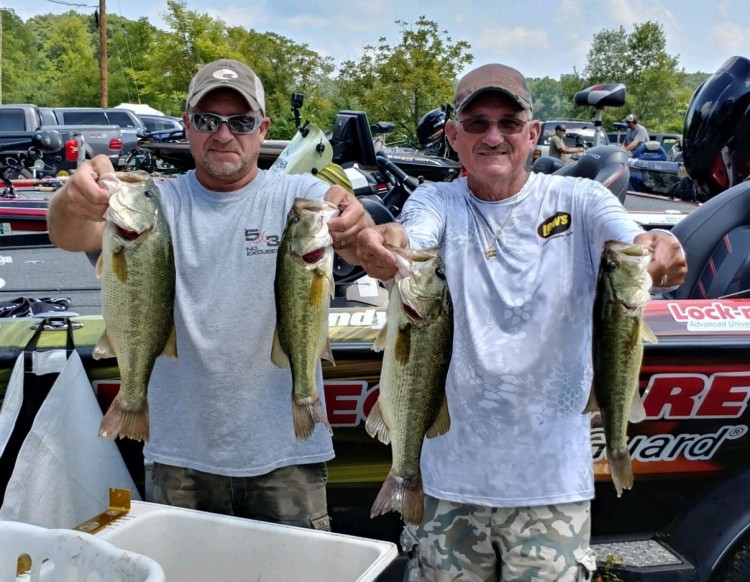 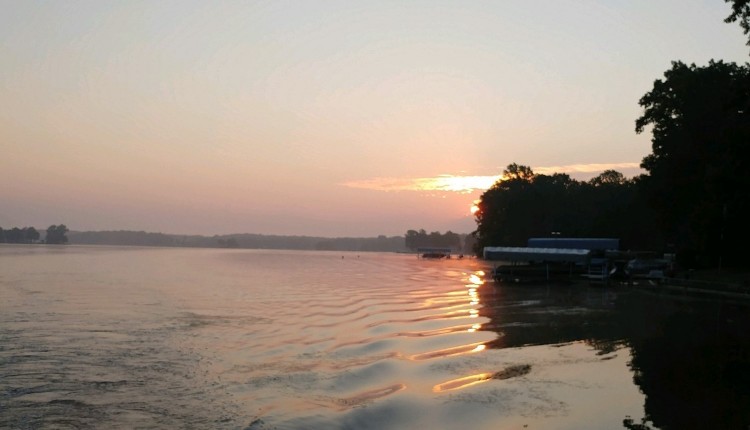 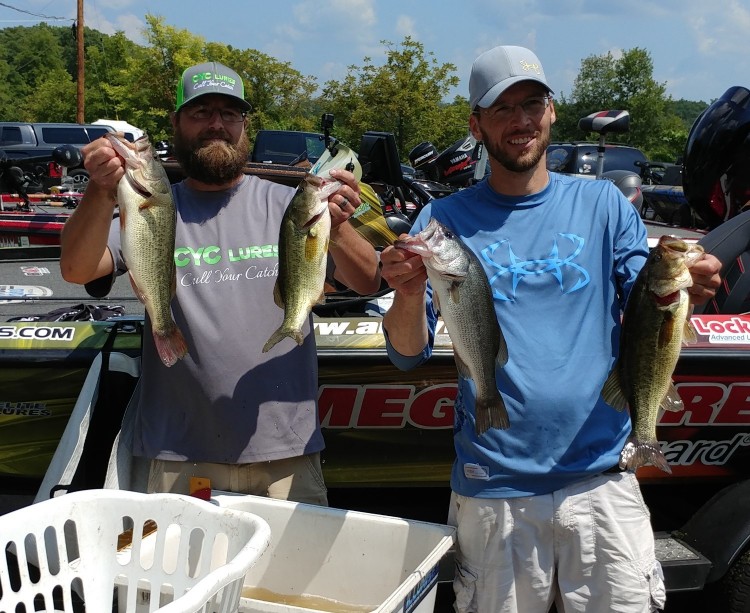 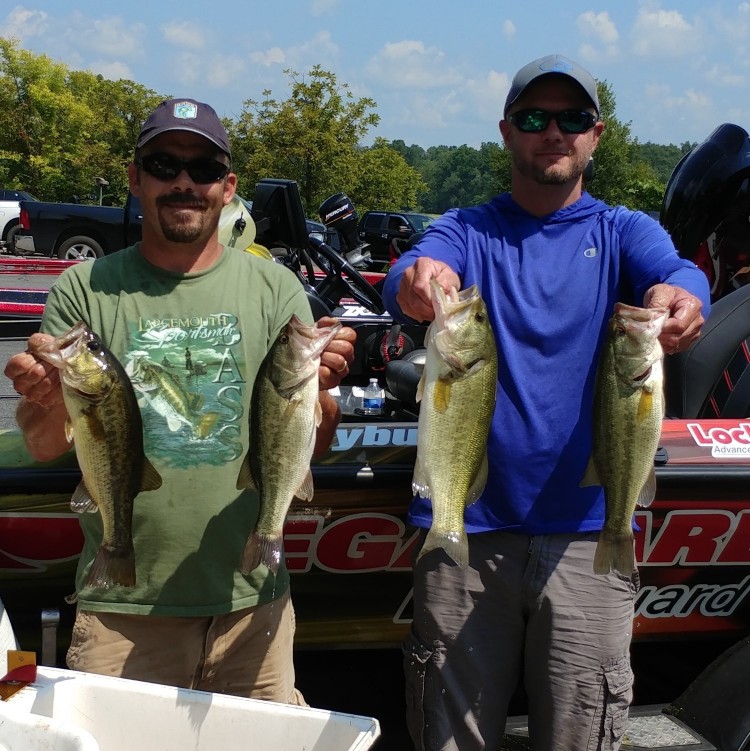 6th Place: A 12.01 pound limit by Don Amari and Kevin Rathke was anchored by the Second Big Bass of the tournament. The high finish earned them $65 and the big fish won them another $65 making their catch worth $130. 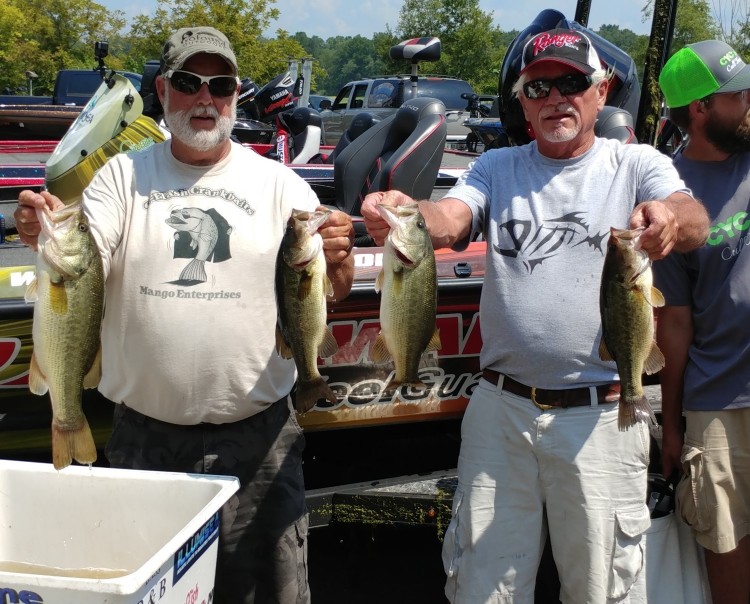 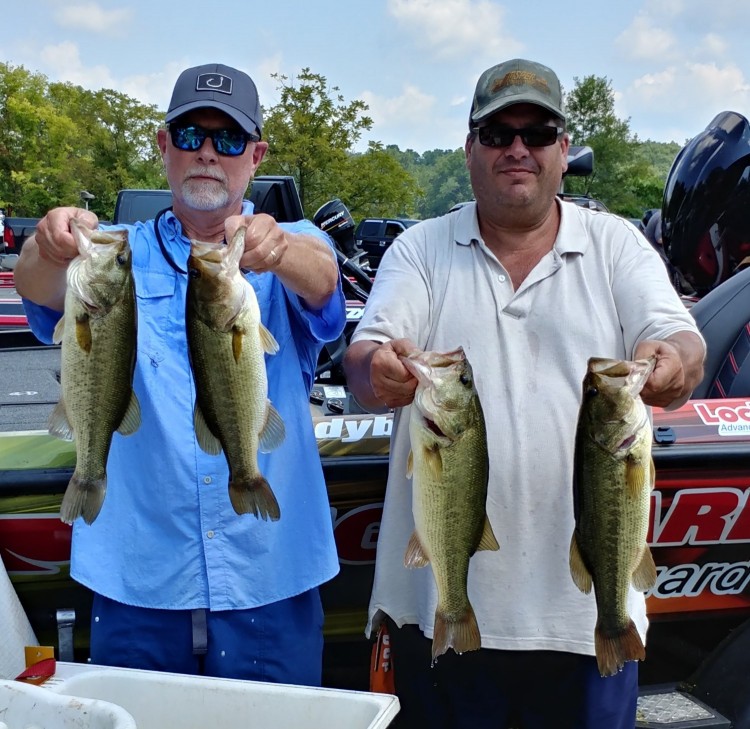