​​Pattern: Largemouth bass to outside edge of breakline

Baits: Drop shot rig with finesse worm and homemade black jigs
How it Happened: Before the storm began, Terry bagged their biggest bass, 3.59 pounds, on his first cast ​​with the drop shot. He reveals, "We sat in 20 feet of water and cast to 15." By 8:00, they had a limit.

Their starting spot produced before and during the storm, but​​
2nd Place:  Kyle Kaser

​​How it Happened: With just 1 tournament left, Kyle Kaser sits atop the Standings, and he is going to have to do it alone. "Cody Bennett [his partner] was in a motorcycle accident and is in a wheelchair," shared Kaser.
3rd Place:  Andy Brossia
​Weight: 14.03; Lochness Lures Big Bass - 4.19

How it Happened: Coming all the way from Ohio and without any prior experience on the lake, Andy Brossia made a lasting impression, and he did it quickly. "All of my work was done by 10:15."

Before and during the storm, Brossia worked a stretch of lily pads​​
4th Place:  Bob Miller & Myron Miller

How it Happened: Discovering a magical boat got the Millers paid. Bob reveals, "Our first stop was in a channel before the storm. We only got 2 keepers but one was a 3.5 pounder." That was half the magic.
Click to view Results and watch the Weigh-in.
meticulously with the frog. "I work lily pads 3 feet at a time," he shared. "Each cast goes 3 feet more over. Once I cover an area, I move the boat forward 10-15 feet, drop the Power Poles, and repeat." He culled 8 times, which included the Lochness Lures Big Bass, a 4.19 pound tank, before 10:15.​​
​​Winnings: $315
5th Place:  Clay Sterling & Brad Sterling

​​​​How it Happened: After finishing in the money for the third time, the father-son duo are now just 6 points out of the lead and heading to a lake where they have a great deal of history.
"Every fish we got," shared Brad, "came from a 15-20 yard stretch of an inside turn between 7-8 feet of water." They kept the boat between 10-12 feet of water and cast their jigs. Before the storm they boated a single keeper and then sought shelter until safer conditions prevailed. After the storm they caught 8 more keepers.
​
Winnings: $140

While prayers and thoughts are sent to Bennett, the same is being made for West Division members standing in Kaser's way. He has been a one-man wrecking crew for most of the season and has been on fire all season. Tippecanoe was a testament.

"My game plan was to ​​​​​beat the docks all day, but after just a couple of short ones at my first stop, I went into a channel, and I'm not sure why. I just felt it."  Immediately he began catching bass on the bladed jig. It took just 30 minutes to finish a limit. He went on to catch 3 limits in 5 different channels. He believes, "The rising water from the rain brought them in." The fish were sitting on the first drop off the shore.
​
Winnings: $420
They left and went to the main lake and "struggled" just to bet bit. They returned to the same channel in the final hour and caught a second 3.5 pounder off the same boat! "The first fish came from the front side of it and the second came from the back." During the final minutes, they stopped on a patch of lily pads and made a critical cull with a frog.
Winnings: $205
once the rain stopped, so did the bites.​​ Luckily, they had a secondary area. "Here," Terry says, "we positioned the boat in 12 feet of water and cast between 5-7 feet." They culled twice with the jig. The common denominator of the two areas was the presence of hog black moss.
​​
​​Winnings: $700
Other Teams in the Money
6th Place: Ron Fabiszak and Jason Fowler pieced together an 11.61 pound limit to claim $125.

7th place: ​​Bo Judd and Ron Crawford (right) not only won $105 for the high finish, but a 3.91 pound largemouth was the second biggest bass of the tournament, giving them another $80.
8th Place: Gary Sroufe and Travis Edgar weighed a 10.96 pound limit and won $85. 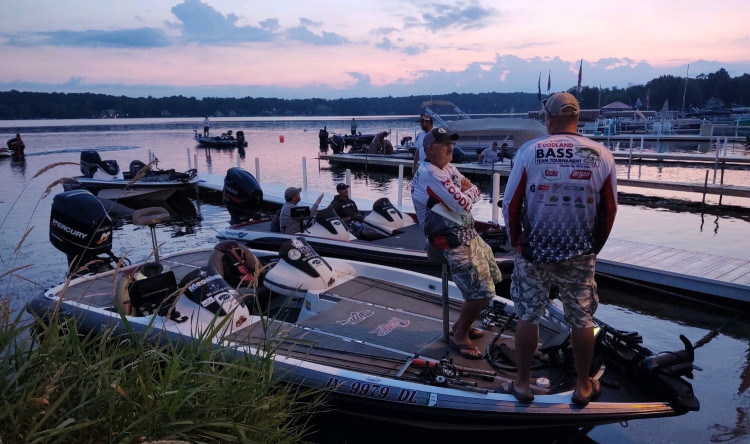 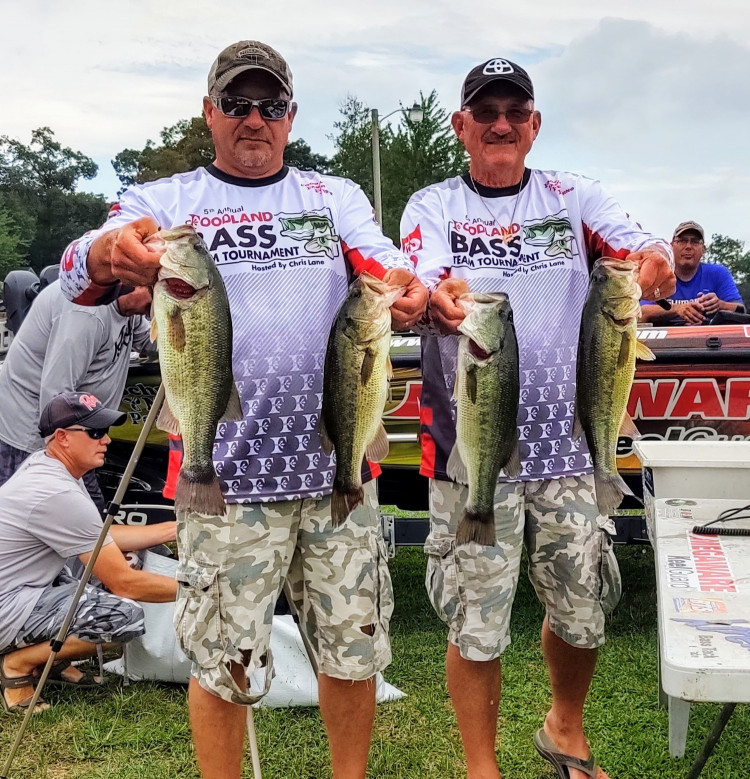 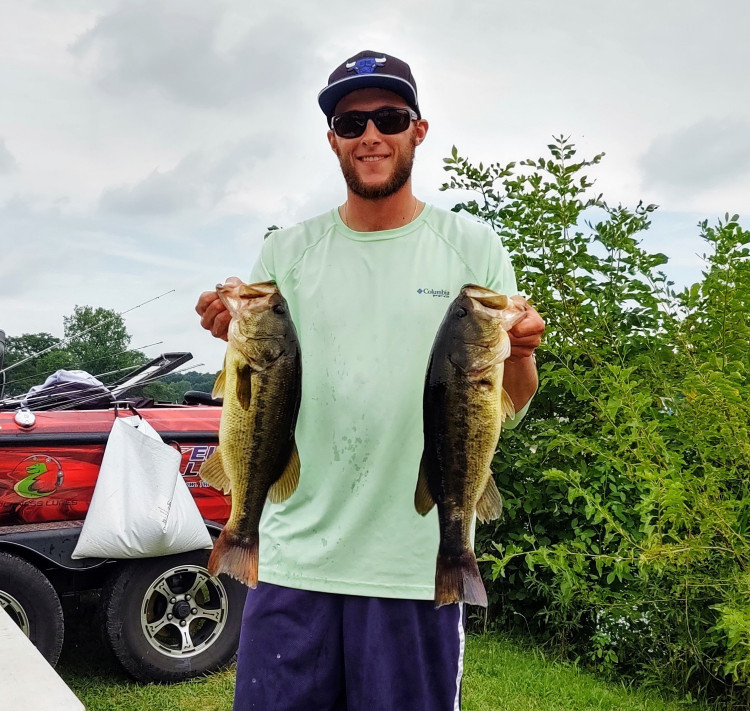 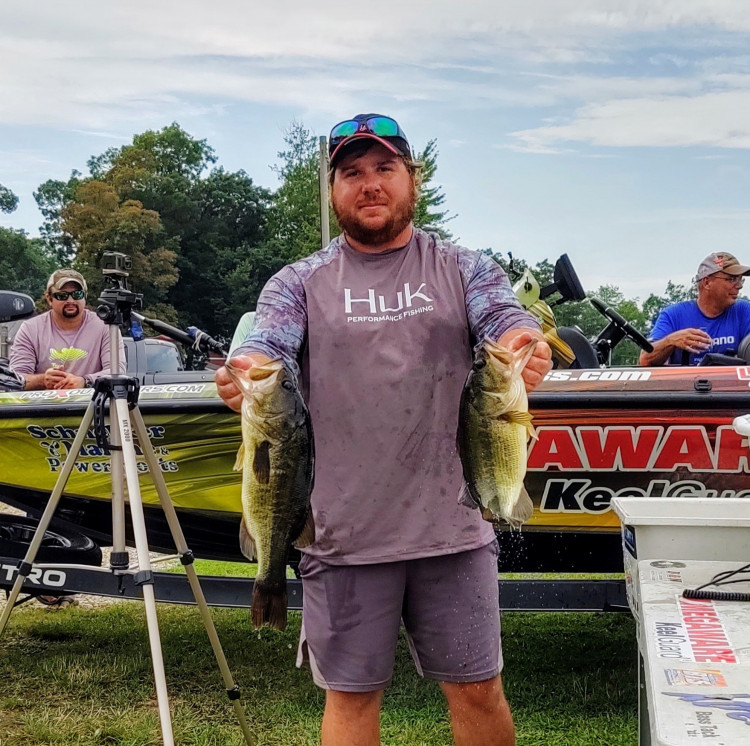 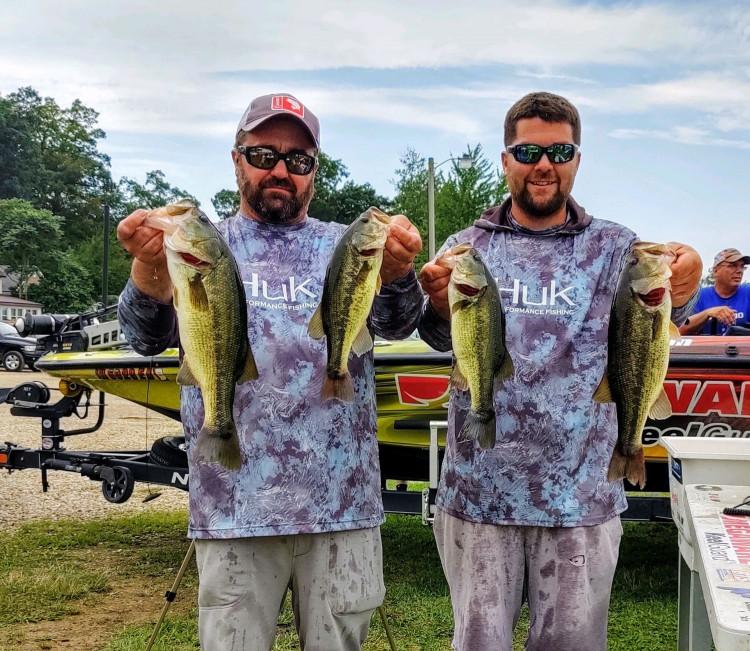 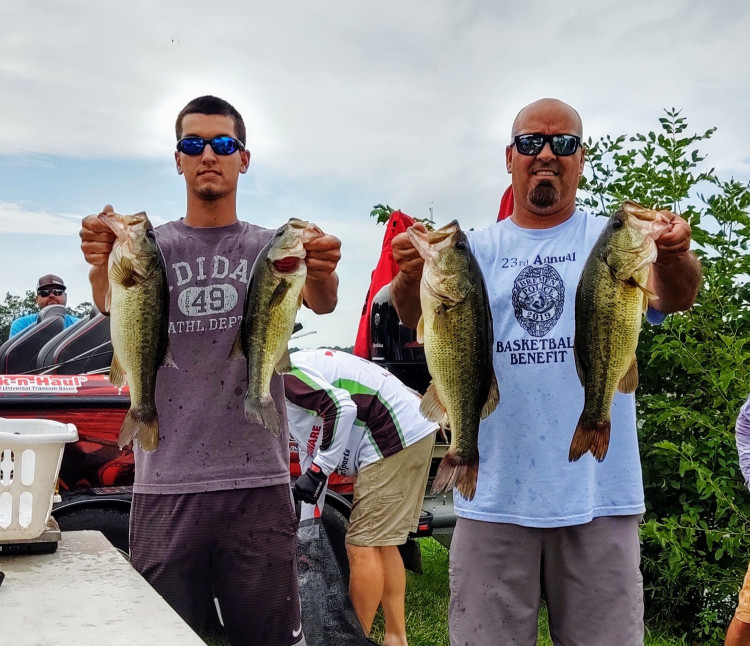 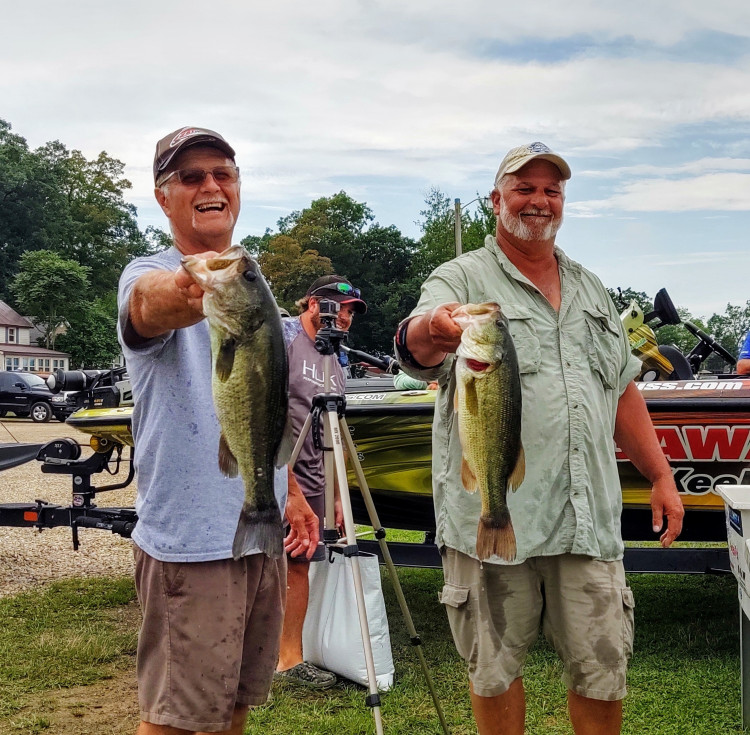