Baits: Gary Yamamoto Hula Grub and Spinnerbait
​​​
How it Happened: Both anglers participated in a tournament on Wawasee the previous weekend, and both had their best fish from Syracuse Lake. So it was an easy decision to spend their
2nd Place:  Kyle Kaser & Cody Bennett (not pictured)

​​How it Happened: In 2016 the R & B Bass Circuit broke up into two divisions. That year Kyle Kaser won the West Division title with brother, Michael. Two years later, Kyle can now be crowned Mr. West as he has reclaimed the title with Bennett. Just like that year, Kaser ended the season with a dominant performance.
3rd Place:  Mark Farver & Steve Kline
​Weight: 10.91; Lochness Lures Big Bass - 5.31

How it Happened: The winningest team in R & B history landed in the Top 5 again, but this was no picnic. Six hours on Lake Wawasee produced just 3 small keeper largemouth.

Farver reveals, "We caught a bunch of fish with jigs in shallow weeds, but only 3 keepers. So we came back to Syracuse to, 'Swing for the​​
4th Place:  Jeremiah King

How it Happened: King had a half hour few ever experience in a tournament. "In the first 30 minutes," King admits, "I caught a dozen fish and 7 of those were keepers."
Click to view Results and watch the Weigh-in.
fences.'"

30 years ago, Farver discovered a spot on Syracuse that has produced many large fish, and it came through again. "On my first cast at this spot, we caught the [Lochness Lures Big Bass] - a 5.31 pound beast."​​​​ Shortly after, Kline boated their final keeper with a drop shot rig.
​​Winnings: $265 + 270 = $535
5th Place:  Travis Osbun & Brian Molnar

​​​​​How it Happened: "We did nothing fancy," insists Osbun, "We just threw our worms in the shallows and kept our foot on the trolling motor." All fish came from 4 feet of water or shallower.
It took them 90 minutes to finish their limit. Osbun adds, "Early on when it was raining, the fish seemed to be all over, but as the day wore on, weeds became more important." Overall, they caught 9 keepers, and made their last cull in the last 5 minutes."
​
Winnings: $105

The team began slinging bladed jigs, but shortly after, Kaser skipped a dock with a  jig and stuck a 16-incher. Minutes later, he added a 14-incher with a frog.

Reminiscent of his second place finish on Tippecanoe, Kaser had a gut instinct to check out a channel. It was a decision that led to being crowned the 2019 Season Champions. ​​They bagged 15 keepers on the frog and skipping a jig under docks. Kaser reveals, "The fish were right up by the bank. The frog had to be right on the bank."

They left the channel to look for a big bite on the lake, but after failing to cull, they returned to the same channel and culled two more times. ​"Our last fish," Kaser said, "blew up on my frog, and Cody cast a wacky worm to it and caught it."
​
Winnings: $420
All five fish he weighed were caught during the first 20 minutes of his fishing time. King points out, "The fish were not positioned under the pads, they were on the edge. All of my fish came from the edge of lily pads."
Winnings: $175
day on Syracuse. Harrison admits that was their preconceived notion, but the weather solidified the decision. "I'm not sure why," he said, "but history has proven that Syracuse seems to shine when the weather is overcast."

​They targeted specific vegetation between 10-12 feet of water. Harrison explains, "The biggest fish on this chain use the cabbage because the bluegill hang around them."

But even with this knowledge and countless hours on this chain, they knew it would be a grind. They caught 8 total keepers and had a by 11:30. ​​Two fish from their limit were caught on a spinnerbait and three from the hula grub. Their biggest fish, a 3.81 pounder, was caught on the grub.
​​
​​Winnings: $710
Other Teams in the Money
6th Place: Chris Carman and William Elliott (left) weighed 9.70 pounds to win $70. They finished 3rd in the Standings. 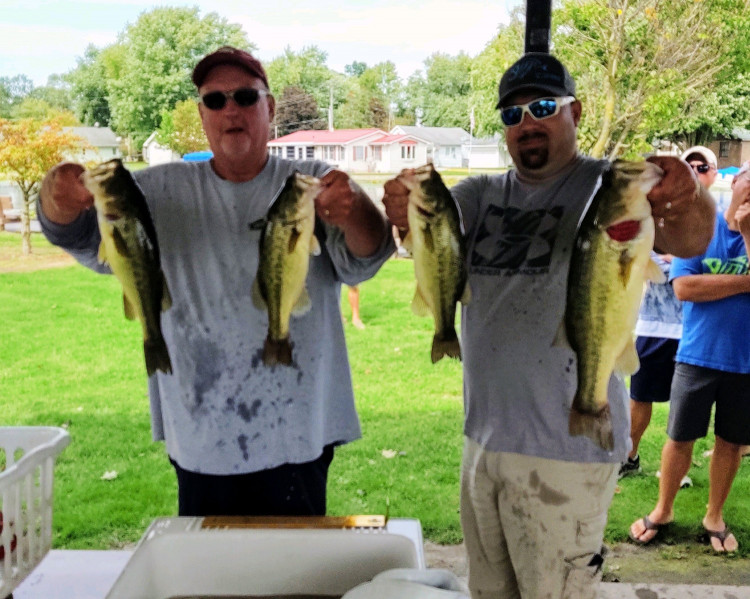 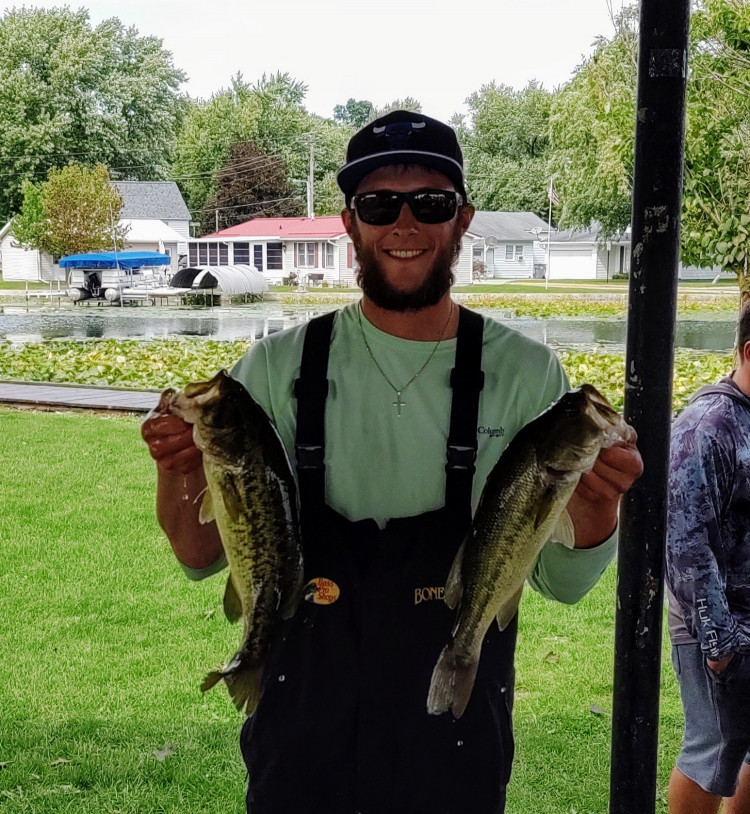 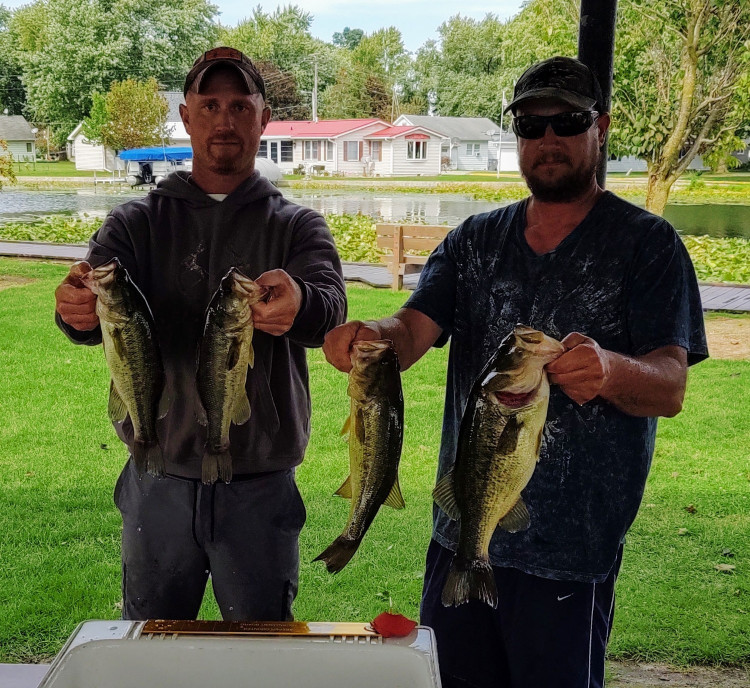 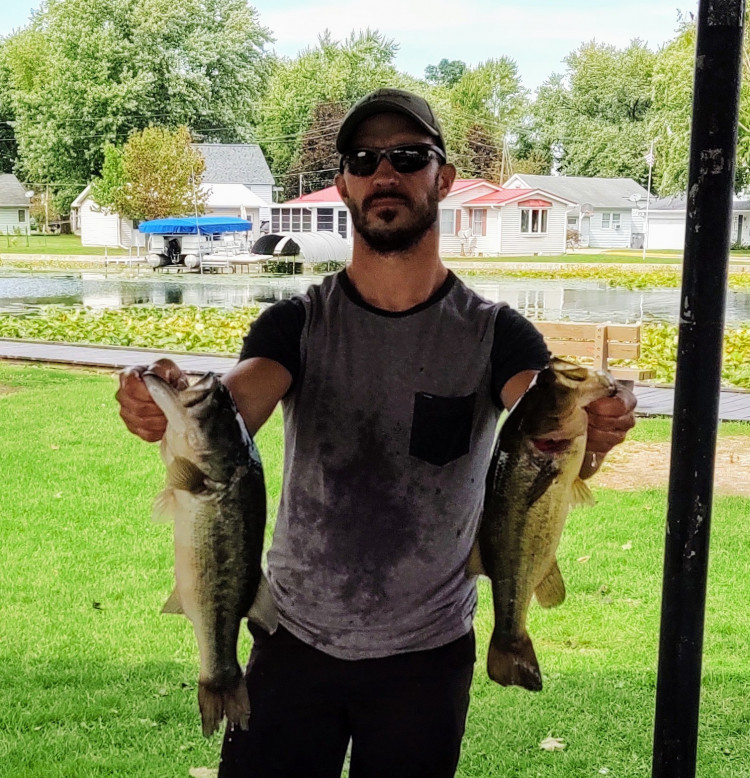 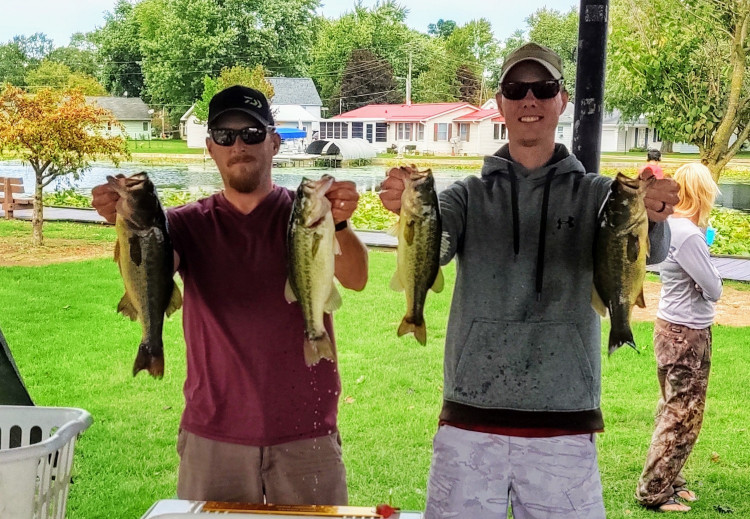 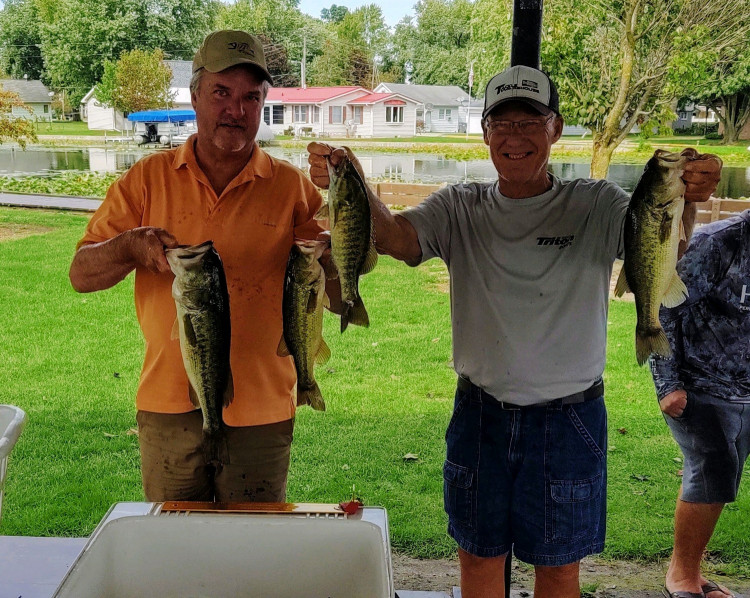 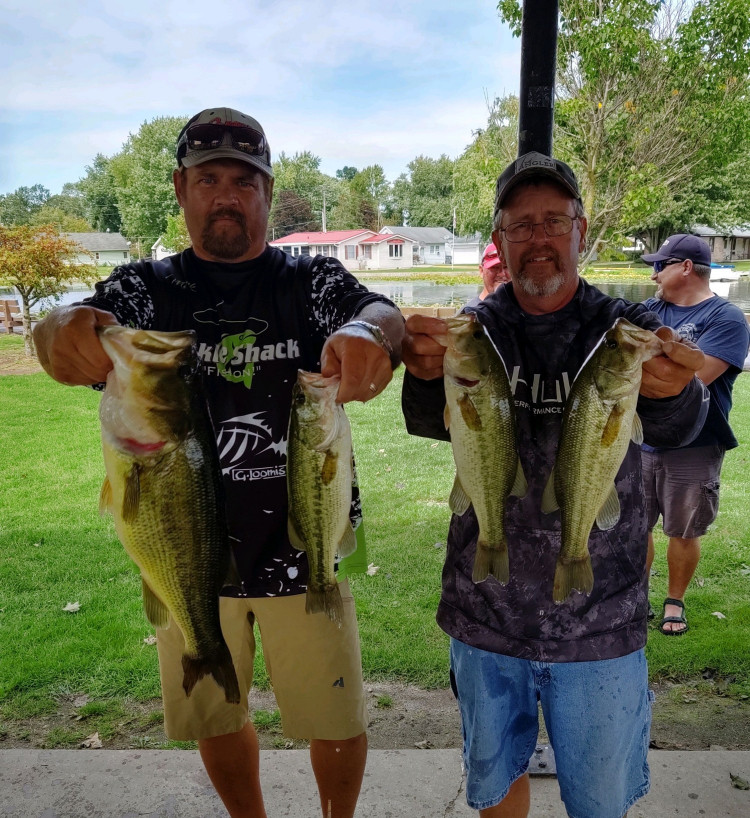 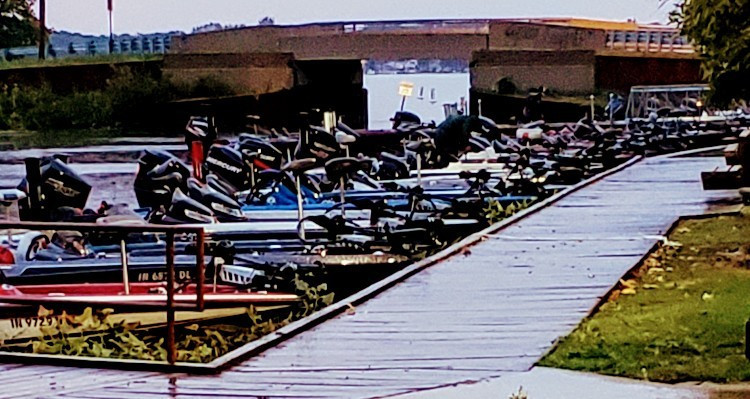